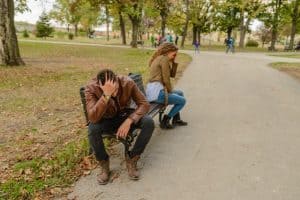 How many times have you been in a heated discussion with a partner and you’ve said some things that you probably wish you hadn’t, or did something you could not take back?  This is reacting to a situation and not responding.  Reptiles do this as well, as they do not know any better.
A couple weeks ago I was at a concert and I was texting someone and all of sudden the conversation had a changed demeanor and I did not like where it was going and I reacted poorly.   My thoughts were, I could not believe this person was saying the things that were being said to me, how did this conversation get so far off course.  And now I’m going to be as mean as I can.
So as I’m known to do, I reacted, and by reacting I really mean I over reacted, and the next day, when I got more of an explanation of events that lead to their thinking and found out there may have been some alcohol involved, it started to make sense.  At this point I finally understood the difference of responding vs reacting.  Reacting is doing something in the heat of the moment, and not thinking clearly or as thoughtful as you normally would.   Responding is listening to what is being said, understanding it, thinking about, and then well responding.
Like everyone else when I get upset about something this is how I go, i go nuclear on everyone, which is not healthy for building relationships or for progress.   I’ve learn over the past few weeks.  I was having another difficult conversation, and my first thought was to get defensive and react.  But I stayed quiet listen to what they were saying, and then I developed my response, and it was a positive conversation.  Now the other party probably wanted to hear something sooner than I was able too, but the topic was sprung on me so I need time to process what I was thinking.
My suggestion on working on this, is to first remember you don’t have to be quick to respond to anyone.  Let your thoughts develop.  Most other people you come in contact with are not purposely trying to hurt or upset you, so show some grace to them as to what they are trying to do.  They are trying to have a tough conversation with you, and it is probably something that don’t want to do as much as you don’t want to hear it.  But this is life and sometimes you have to have a hard conversation.
Think about what was said, process your thoughts and then respond.  Don’t skip that middle part, process your thoughts.  If not all you are doing is making a tough conversation even tougher.    There have been many times I’ve skipped that middle section only to say some of the most hateful, mean spirited stuff you could think off.  All that does is ruin relationships.    The event I talked about early at the concert, the next day when we talked, I couldn’t even look at this person, I had thought it was from me still being upset at what they had said to me, but it was in fact i was so embarrassed by what I said, and that was why i couldn’t look at them.